I captured this shot at sunset during a Meetup trip to Yosemite a few years ago. I spent a few days there with a fantastic group. Our shoot itinerary included Horsetail Falls, Cathedral Beach, Yosemite Falls, and Valley View. When we arrived at the Valley View location, I was stunned to see so many photographers! Their tripods were strewn along the riverbank like an army of insects getting ready to invade the park! I remember everyone was jockeying for position, taking test shots, trying to setup the best composition. After neurotically moving closer to the river then off to the left, then right, and then back again, I finally settled on a reasonably centered perspective. It was pretty cold as well, with snow on the ground and the temperature hovering somewhere in the 40-degree range. Everyone was bundled up, with coats, gloves, and scarves, and I was wearing some gloves with cutoff fingers and a removable mitten flap so that I could manipulate the camera settings. I used a Canon 5D Mark II with a 16-35mm Canon lens, and my aperture set at F22 in aperture priority mode.

I spent a good thirty minutes or so constantly uncovering, blowing on, and then covering up my freezing fingers while I adjusted my camera settings. It seemed like an eternity, waiting for the sun to set, bouncing around to keep warm and noticing the steamy breath of my fellow shutterbugs on the shore. Finally, the rays of the sun started to descend across the valley, lighting up the seven sisters, Half Dome, and El Capitan. I remember I let out a whoop as the sunset show began. I thoroughly enjoyed this spectacular scene as the sun's rays slowly crept across this magnificent valley, bathing these iconic granite monoliths in a deep orange glow. 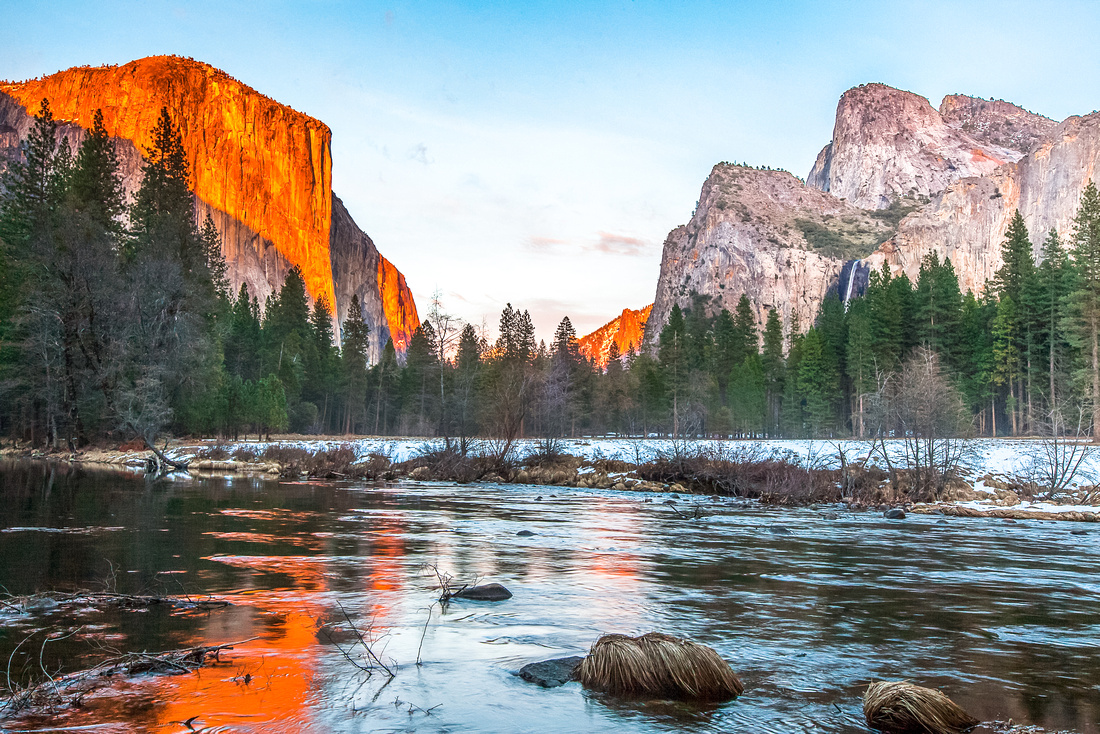